Too Badu for you

In the last couple of days i've been listening to a lot of Erykah Badu, and man is she good. In my book shes, like the musical sister Jill Scott never knew about.

Sadly not all is well. I discovered that Ashley, from such famed posts as "meet my friends", lost his mother to Cancer, plus the ex-partner of one of my work colleagues has been in hospital for a while. To them i wish them all the best, and hope for a speedly recovery, as for Ashley my heart goes out to him, and i pray that his mum made it to heaven.

In business news, Isolation is on hold while i do some contract web design work, Ajax and the usual lark. But in even bigger news, i;ve join the "Fat Cheetah" Revolution. Fat Cheetah is a three man company destined to take over the world. It comprises a quality graphic designer; Paul, a classy Web Developer/Application Programmer; me and a Shark Tunde. The perfect blend.

If you live or work in the southampton city area, you'll be hearing from us!

Thats about it for a round up, i'm try to save money to pop another Gig of Ram in that black plastic thing over there (writing on my nix box), Was ill for the last week, and had apple juice and popcorn for dinner, plus Jai quit smoking.
Quote of the Day

Lights dim
Anwar "Where did nikya go?"
Somone else "Don't worry i can see his teeth"

We love him really
Posted by Unknown at 12:35 am No comments:

Super amazingprogrammer looking for work!
i code in the loads of langauges, and i do contract work for cheap. If your interested conact me, and don't try the line that you couldn't find my email address, half the population of nigeria knows it, so for you it should be a peice of cake.

what ever, call me

ps. I haven't lost my job, just looking to move up.
Quote of the Day

Yeah, because we come across 18 + digit binary numbers in our day to day lives

Computer architecture can be fun, honest.
Posted by Unknown at 2:47 pm No comments:

Well since the data disaster, i've managed to rewrite a sizible chunk of code for isolation. However, it's hard work, considering i had done it all before. I've also gone backup nuts, and wrote a back script that i keep in the dock.

In other news, i've started on a light Cocoa project. A Cocoa version of one of my favourite games, Dope Wars. As you've come to expect here's the teaser... 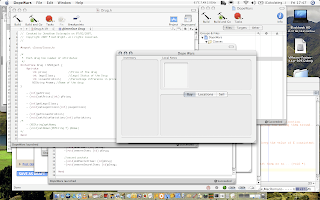 Loads of work as you can see Started yesterday, while watching lost. Now although i love Xcode, i hate this whole idea of connecting the program to the UI. I can see the benefits, but i dislike the way it's done. Sure it's kind of similar to the way things are done in visual studio, but still.

Plus i've started learning about assembly on a serious level, so i'm now learning 3 languages at the same time, as well as brushing up on my C skills, to help improve my ideas on all these new fangled languages. Coupled with this i want to do some proper ruby on rails development, and see what all this crap is about in a production like environment.

Lastly, i've discovered that for all my love of computers macs, that i really don't know what i want to do after i leave university. Web development, is exciting, fairly easy and pays ok, but it's not a challenge. I write CSS in my sleep.... Writing kernel/device drivers looks cool, but how often does one need a new camera driver? Software development looks cool, but things take too damn long. And i'm not keen on all this paper designing either, wheres Visio for OS X? Although i plan to work for no one, and do my own thing, i'm not quite sure what yet.

Am i too nice, or do i just like thinking that?

Lets put the vote to the people
Posted by Unknown at 5:39 pm No comments: