It's Here and its the best thing since sliced bread

The Blackbook, is finally here. And i must say that its the best thing since sliced bread.

My mate, Tunde, says it's "Sexy", personally i completely agree.

I can't believe that i waited so long to actually buy it, and i did several very sad things, which i won't admit to the video is coming soon

but enough talk heres a couple shots of it. 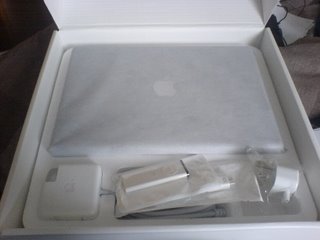 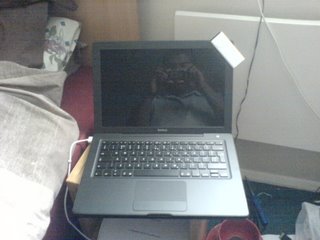 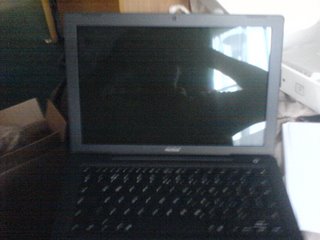 Posted by Unknown at 7:03 pm No comments:

No Blackbook, but loads of code

Despite apple screwing with me, i have managed to make progress in other areas. Diggr, an application that i started many moons ago, is moving ahead nicely.

The Database hookups, have gone in, and appear to be working nicely. The HTTP Lib that will enable the application to be independent of the hotsync, is almost at alpha/beta test stage. All that is left is the XML parsing engine, which will be the heart of this beast, and will be the make or break of the application. The quicker it converts, the quicker the user can start digging.

Here's a few screen shots from it running live in the emulator/simulator,

The nice n' shiny Diggr Icon, the red ring is actually a mistake. I'll remove it in later builds. 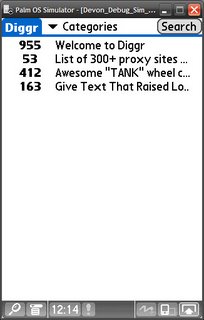 The main screen, from here you can digg stories, and enter the viewer screen as seen below. 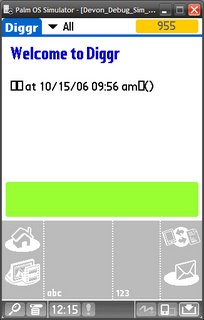 The main viewer screen, there a few bugs in it, but it should soon look similar to my lovely mock up as can be seen in my flickr account.

"Hi my supposed senior member of stuff, thanks very much for the pay rise mark, 5 to nine and F*%* off!"

China is a long way away

Right, i getting somewhat sick of hitting Refresh on this TNT tracking page. How long does it really take to unite a boy who has waiting 7 months for laptop with the apple of his eye? Coupled with this is the distinct lack of certain people, who happened to have disappeared off to sweden/bora bora.

Meanwhile i've downloaded every single mac application that catches my eye, All 51 of them. I've cleared a space on my desk, set a back aside to carry the Blackbook as it will be known. I almost wanna call them up, and explain to these folks who i am. Programmer extreme

Well it you see a plane with a black Macbook in the window, call me i'm expecting one.

Nick "They where drinking fish and milk on the stage"
me "And you wonder why i haven't been to jumpin jaks in two years..."

No matter where it is Hemel or Solent, jumpin jaks is always crap, and a exclusively crunked venue.
Posted by Unknown at 1:09 am No comments: 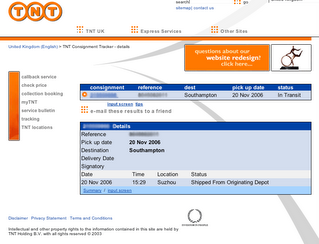 I can almost taste it, and i'm not talking about chinese niether. Expected delivery, the end of this week! Can i survive till then, i'm really not sure. But it's very cool that it comes straight from the source, and halfway across the world. I think this is a fairly good reason to take a trip to the far east...

In case your interested it is configured as such...

for the pretty price of £850 after student discount.

Not bad to be the envy of most mac users out there, now if you excuse me, i need to see if i can find the plane on google maps...

"You guys need to either drop the roses, or stop walking together before someone starts getting ideas."

Couple of my mates worked over the weekend, and came home with roses, they happened to be straight homophobes, so i thought i ought to lay down the law.
Posted by Unknown at 9:52 am No comments:

Why people go out with people of the same race.

Because it's too damn hard to do it any other way!
Black and White, and vice versa works "fine", but Asian/Oriental inter-racial relationships with either whites or blacks are next to impossible.
Why? I have not the slightest idea. If you don't believe me, just look around. I've heard people say that it's often because the parents want to keep the family relatively poor, besides who wants a black person in their family, they'll just get shot.
From personal observation, i find that the racial division is no longer between each individual race, but rather blacks and whites seperated from asians(indian sub-continent) and Orientals. Personally i don't care, but it's just so damn weird.

If your wondering why the hell this is bothering me, yet me explain. Theres this girl called j, nice and all. I go to her flat from time to time, and almost when ever i go, there is someone else there, and thus far they have all been asian, and looking to "get a peice". My black flat mates find it strange that i like her, mind you i do have weird taste in women, viki, clare, ....

Maybe it has something with my drive to experiment and try out new things, who knows. I think the barrier may be home life, and social environments. How do you explain fried plantain to an asian? Scratch that, how do you explain it to anyone outside of the caribbean lot.

I don't like to think of myself as ignorant, or nieve, but the world is so badly split into factions, it surprises me that we are still here today. I guess it's a good thing that money doesn't have a race, otherwise we would really be screwed.

Thats my racial rant for the day

if you wanna see pictures of the ever so cute j, and or anyone else that i've met thus far, check the flickr account. Till another time later

Teacher, pointing to T|X "You can get a version of Maple for that?"
Me "I'm fine with excel, really"

This damn weird set logic and generally weird maths is getting on my nerves.
Posted by Unknown at 8:31 pm No comments:

This epidemic is taking over the world, people left right and center are finding that they are no longer to entertain, their dates due to a mysterious sickness, some say it has links to freshers flu, others are doubtful saying that it may "pre-loseritist".

We spoke to one victim, Jonathan, from Southampton. "I asked this girl that i like round to dinner, but after cooking for her and one of my mates, i found that i could not summon the strength, to even talk to her let alone eat my own cooking."

We'll have more on this series of events in the near future...

Take care till another time.

Posted by Unknown at 2:18 pm No comments:

If only i had the magik stick...

Howdy, one and all. I do still blog once in a while. Where can i start ... well i give you a break down of the last couple of weeks

Thats about it, keep your eyes on the flickr account as the pictures, will keep rolling in, maybe even a few of J (that isn't actally a code name), it's a actual person, seriously.

Right i'll catch u all later

Schuester "My friend at the apple store can get 40% discounts"
me "Does your friend mind doing me a favour... "