When did it get this bad? 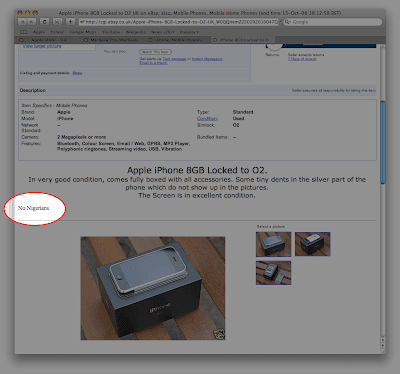 When did it get this bad? Just as well i'm Jamaican

Simon: What you getting?

Me: An iPhone, worst thing is i don't even want it

Damn Apple and closed market tactics
Posted by Unknown at 4:30 pm No comments:

FOWA was actually amazing. I highly recommend it to anyone who, like myself doesn't have a hardcore programming team to socialize with. One of the key benefits for me was meeting other people, the talks were good, but the networking was better.

Francisco Tolmasky
My highlight was getting to talk to Francisco Tolmasky. He is part of the team behind 280 north, popularized for its 280 slides app, and for bring Cocoa to the web. It was fantastic to talk to someone, who is trying to take the future of the web in a particular direction, and having the opportunity to understand that vision first hand, and be able to interact with them.
Plus it was a chance to talk to a not only a (former) member of Apple's development team, but also to man who's work can be found in many pockets, far and wide, as he was part of the mobile Safari development team.
Perhaps the most interesting thing for me was discovering that he was actually head hunted by apple. He had submitted patches to Webkit, and seems that the overlord was watching and gave him a call.

Jason Calacanis
I also got say hello to Jason Calacanis. He gave an insightful talk into his hiring philosophy. Essentially he advocated dumping average performers, and employing only good and excellent staff, arguing that there work output is significantly better than that of a mixture of average and below par employees.
I partly agree, however from a emotional stand point i think i would have a issue with sacking folks just because they're not amazing, however it could be argued that i wouldn't have employed them in the first place. My theory is that unless your smarter than me, it's not gonna work out.
Live Diggnation
Alex Albrecht is actually really funny in person. I never realized just how funny he is until the diggnation taping. His timing is fantastic.
Personally i'm not the biggest fan of Diggnation, however it was fun, i certainly wasn't screaming and diving around for prizes, but it was good fun.
Adobe Air
When i had first heard about this i thought it was gonna be amazing. However the need to install the framework put me off. However adobe has discovered that no one wants yet another shockwave/flash/sliverlight situation, and you can now bundle the framework with your app. I spoke to nice guy at the conf who explained to me all the cool stuff i could do, and answered all my questions. Air looks like a serious competitor to traditional (does a traditional web app exist?) web apps. The ability to run offline, and completely independent of the browser is temping, a great use is for forms in corporate setups, (read oracle forms and it's siblings are dead). Look out for some air apps in the future, however first i gotta work out how to get the application.xml file to work correctly!
New Project(s)
One of the main reasons i wanted to go to FOWA, was to borden my horizons, and thanks to my new dutch friends i did just that. I've been commissioned to make a small iphone app. This is ideal as i wanted to do some work with the iphone, but i had no iphone, and no ideas.
Since i get to do some iphone work, and i'm not really scared nor care for apples legal team, i'll try to publish some samples as i explore the SDK.
Macs and more Macs
I knew that macs where popular among my kind, but damn! There were too many, i almost felt sick. I would have loved to see a photo of what the audience looked like from the stage, it would have just been a sea of apple logos. On the note of Mac laptops, the new ones come out tomorrow, i think i might have to drop a G ...
All in all FOWA was great, I'm tempted to go to the one in miami in Feb 09, however the whole idea of a conference in miami doesn't really seem like work. Plus i'm a third year now, i can't be flying around the world 'networking' ... can i???

Ignacio: To follow a testing methodology?
Me: Nah, not really.

This is why it is important to go to conferences!
Posted by Unknown at 1:43 pm No comments: