I took a picture [HOLLYWOOD edition]

Posted by Unknown at 5:24 am No comments:

I took a picture [中文 edition]

Posted by Unknown at 5:22 am No comments:

I took a picture [Apollo 11 Edition]

Posted by Unknown at 5:19 am No comments:

I took a picture [Israel Edition]

Posted by Unknown at 5:18 am No comments:

While some people think i spend all my time on a perpetual vacation, it is sadly not the case. Everyday there is a little bit of something or another to be done.

However since i've been on the Big Island i've made an effort to try and relax, and actually have a vacation. Its not like i'll be having another one anytime soon. Being an iPhone developer and having loads of time off aren't compatible ideals.

So yesterday i started creaming myself on the prospect of visiting Waipo Valley, however it seemed so distance, and far from anywhere that it may as well have been on another planet. Initially i dismissed it, and decided instead to head for Akaka falls, a lovely 400ft waterfall only 20 minutes bus ride away.

However when my bus got to Akaka falls i didn't get off. It was a beautiful day, my camera was charged and my memory card was empty. I rode all the way to Waimea, in the north of the island, glimpsing the Towering Mount Kea, on the left and the steep coast to my right.

Though my consumption and research using the fantastic Offmaps i had learnt about a trail, just to the north of Waimea, that appeared to reach the valley. There is a more direct trek, that takes you to the head of the valley, however this is several Kilometers outside of town (READ not near the bus stop). So i decided to go a slightly different way, that allowed to me to go through town. 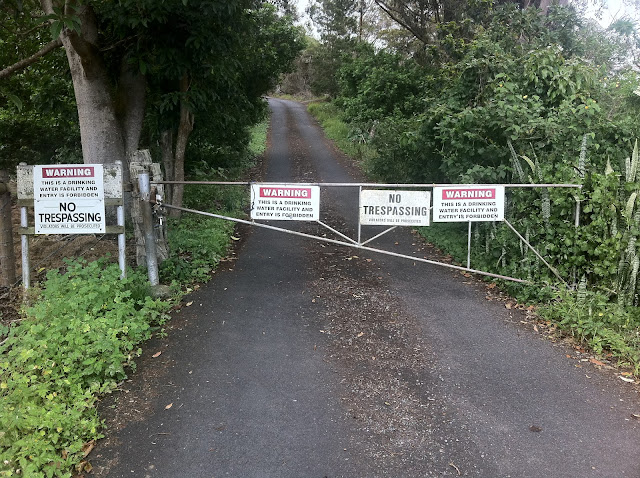 After walking though a residential neighbourhood to the north of the town. I found the entrance to the trail (above). Like all good hikers, i just ignored it and marched on. 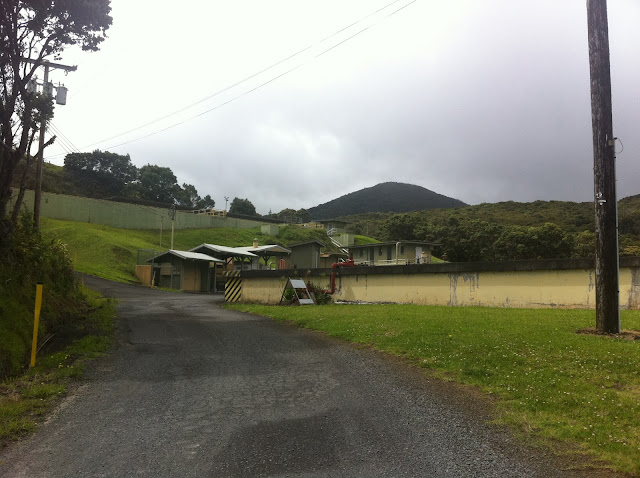 After climbing the first hill, i got to what looked like a water treatment plant. Despite the signs at the gate, i vehicle from the Hawaii water department drove past me, but said or did nothing. 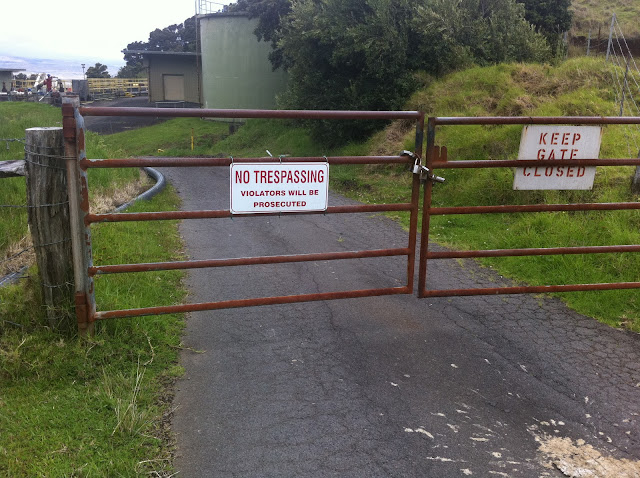 After the passing the water treatment facility i got to yet another gate, informing me that i was doing something or another wrong ... i ignored it and continued the march. With this particular gate i had to choices, jump it, or use the huge hole in the fence. It's always great to have options. 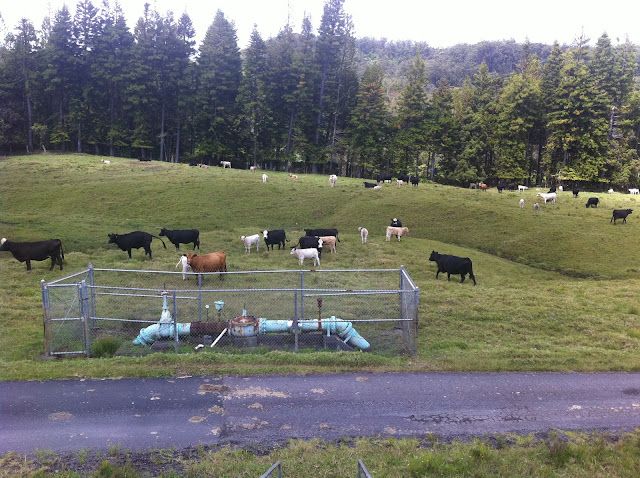 I was greeted by field full of cattle. I have to say that walking though a field of cattle by yourself is one of the strangest experiences i've ever had. They all just stare at you, and track your every movement silently. It reminded me a lot of when i was in China. 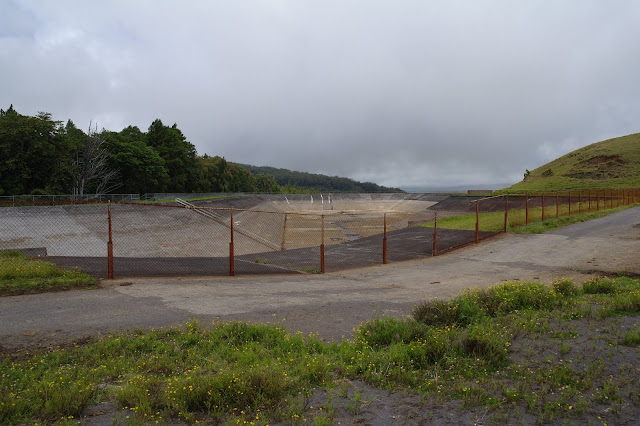 Climbing the hill further revealed a 50 million gallon reservoir, that was bone dry. I assume it fills up with rainwater run off over the winter, and then drains in the summer. This was one of three big reservoirs buried in the hills. 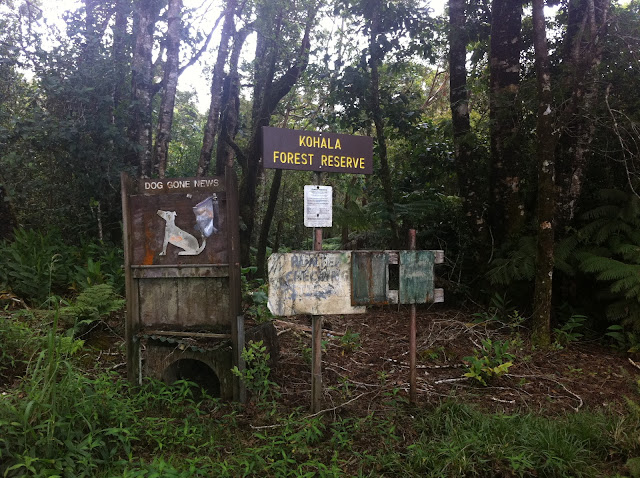 After another 5-10 minutes of walking a finally reached the Kohala Forest Reserve, at this point i knew it was on. I opened that gate and marched onward. 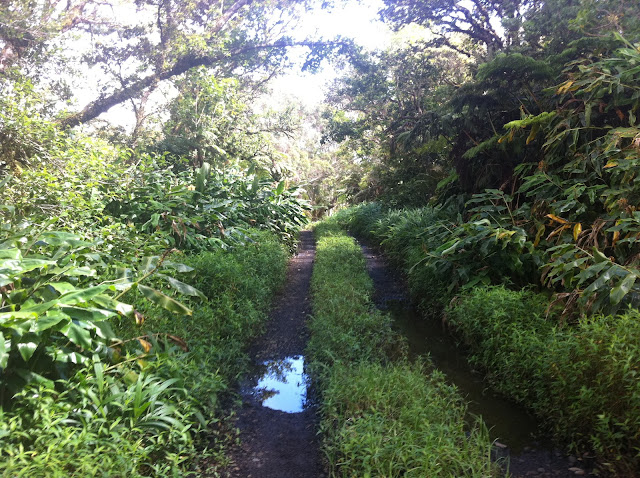 It went from grassy cattle pasture, to rainforest in the blink of an eye. The trail was easy to follow, but due to my naivety i was wearing trainers... 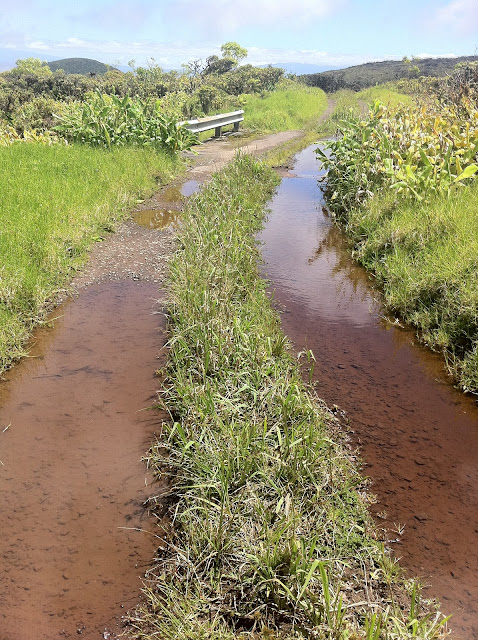 Trainers that got completely murked. There is a water pipe that runs along the trail, in several places it is leaking, which caused the mud trail to flood. Initially just walking on the grass was enough, but there were several places where this simply wasn't enough. 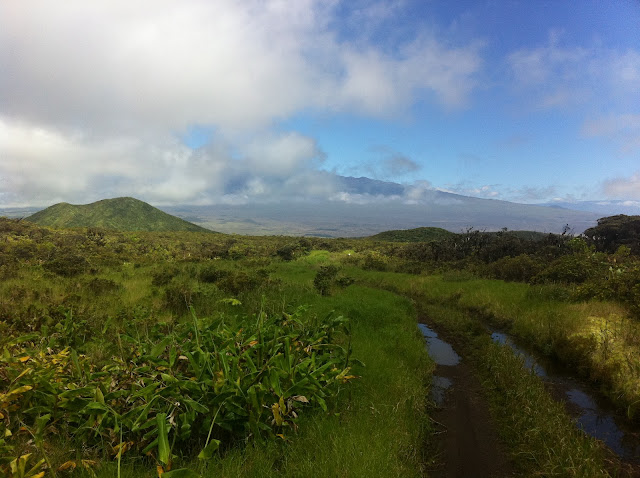 The landscape changed quite rapidly, going from rainforest to hilly plateau in a matter of minutes. While your at least 3 miles away from the nearest human being, you amazingly have 3 bars of AT & T service. I had turned data off to save battery. I'm not the worlds most amazing hiker so i didn't really want to be stranded in the middle of nowhere with half a sandwich, and Nutri-grain bar.
By this time i was almost 2 hours into the hike, I wasn't physically tired but the trail isn't scenic. There isn't much to see, and certainly no one to talk to. While i knew roughly how much further i had to go, the fact that i knew i had to retrace all my steps was beginning to depress the hell out of me. Especially as i was starting to consider if this dotted line that i had sacrificed my time to was actually a route to nowhere. I spotted a small hill up ahead, and made a deal with myself. If the canyon wasn't over the hill, then it was time to call it a day. 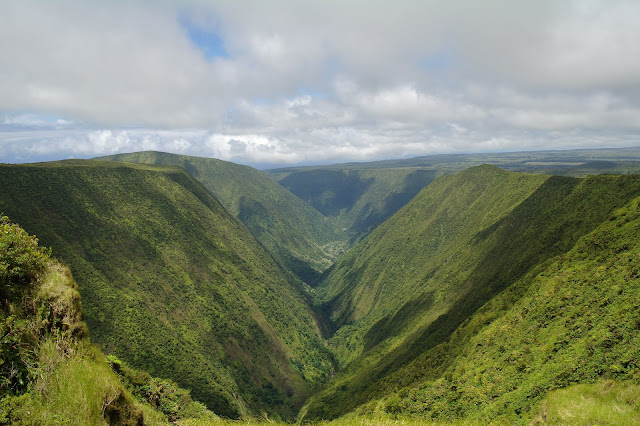 And there it was, 2000ft straight down, almost 4 miles in the middle of nowhere. I was at photographic "pay dirt". After about 10 minutes of this beautiful vista, i high tailed it out of there, rain clouds where all around, and this is the last place you want to be when it rains, especially considering that i wanted to salvage what was left of my trainers.

Overall i learnt a couple of things about my hike.

Posted by Unknown at 9:50 pm No comments:

To be completely honest i knew very little about Hawaii as whole before i came here. But i've learnt a lot in the last 5 days. Mainly that i need to learn to drive. So thats definitely on the list for when i get home (finally).

Having flown into Oahu, i spent most of my time in Waikiki, Honolulu. As i was warned it was chock full of Japanese tourists showing off their Canon's and Nikons. I have nothing against my friends from the land of the Rising Sun, however i do suffer from a serious case of Lens envy.

After 6 days in the Japanese version of the Costa Del Sol, i've  flown to Hilo, on the big island, aka Hawai'i. Today, i felt like an idiot for even spending more than two days in Oahu.

Firstly the big island, is well, BIG. The road that runs around the entire coast is almost 300 miles long. I spent today in the car with some good people from Holland, we barely explored a quarter of the island. This place is huge. 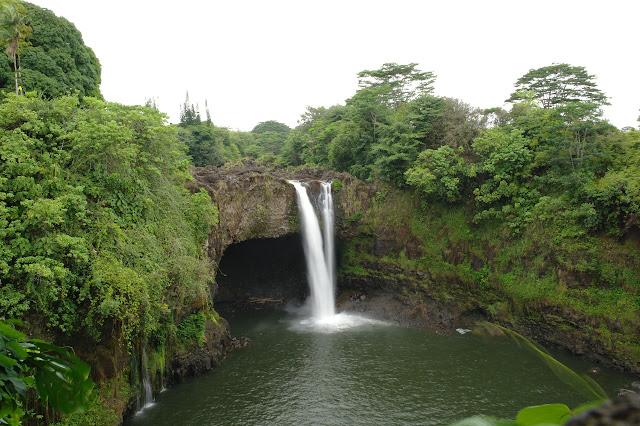 What really stuck me is the differences in the flora in various parts of the island. In some places it looks like a Rain forrest, while in others it looks like the surface of Mars. The above is the beautiful rainbow falls. 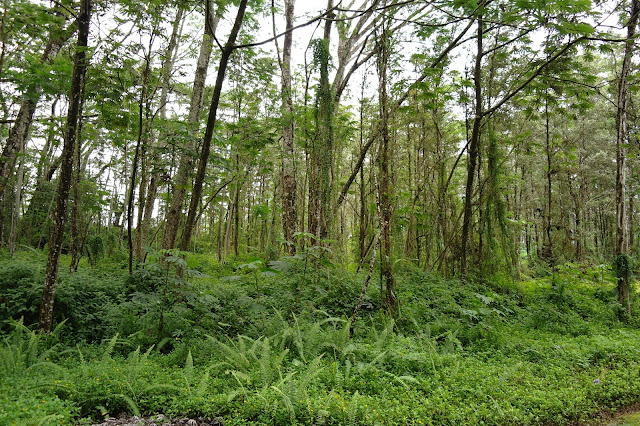 This is an example of the rainforest like terrain. It even has a canopy that the Brazil Rainforest would be jealous of. Really makes me look forward to the day i finally set foot on the continent of South America, Un dia, un dia. 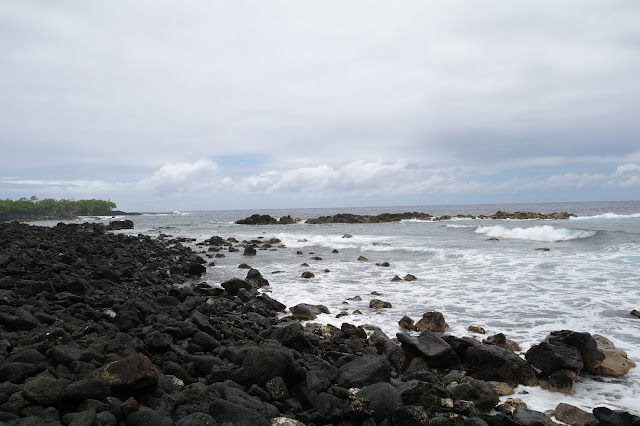 Then there is the black volcanic rocks. While i know the landscape was formed by magma, it almost seems as if it's been scared by it. I've been fortunate enough to see some amazing things. But this is truly fascinating.
Posted by Unknown at 6:39 am No comments: