Getting the file size before upload with Ajax

One of my new projects requires users to upload pictures to our service. The problem is that everybody and their mother has a 7.2 Mpx camera. After some wikipedia research i discovered that jpeg photos are encoded at maximum of about 8.25 bits/pixel. (don't write me about decimal point bit values please :) ).
So out came the pad of paper (and calculator)...
(7.2 * 10^6) * 8.25 = 594 * 10^5 [bits]
(594 * 10^5)/8 = 7425000 bytes or 7.1 Mb per picture
Now i wanted to limit the users to 1 Mb per picture, and wanted them to upload numerous ones at that. Now from a usability point of view it would be a "epic fail" if uncle Roy waited for 5 minutes while his picture uploaded, just to discover that we won't accept it because it's too big.
Now, I imagine your saying that this problem has been solved, it's called a flash uploader (or sliverlight depending on who you get your checks from). However there is a new solution, doing file size checking without flash, using only ajax. 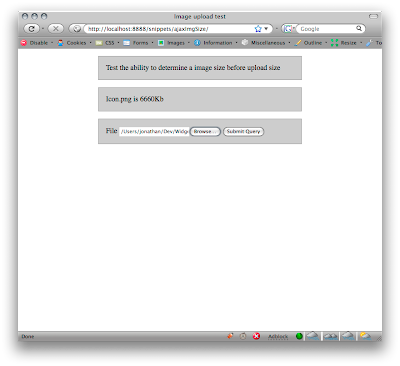 Thats right ma, no flash. Firefox 3 has introduced something new to our world. It's called the filelist Object. Lying deep within in it is a property called (drum roll please) fileSize, and you can use it like so...

//Only works in firefox 3
//i Used jquery to do a dom lookup
//However you could do the ol' fashioned window.document.getElementById()
fileSize = $('#fileInput')[0].files[0].fileSize;

It returns the size of file in bytes as an integer!
Hopefully you've learnt something new, i certainly did. I have a plan to get a similar technique to work on all browsers, however at the moment i'm being thwarted by browser security issues :(.
You can get all the files over at the lab
Andrew Carnegie